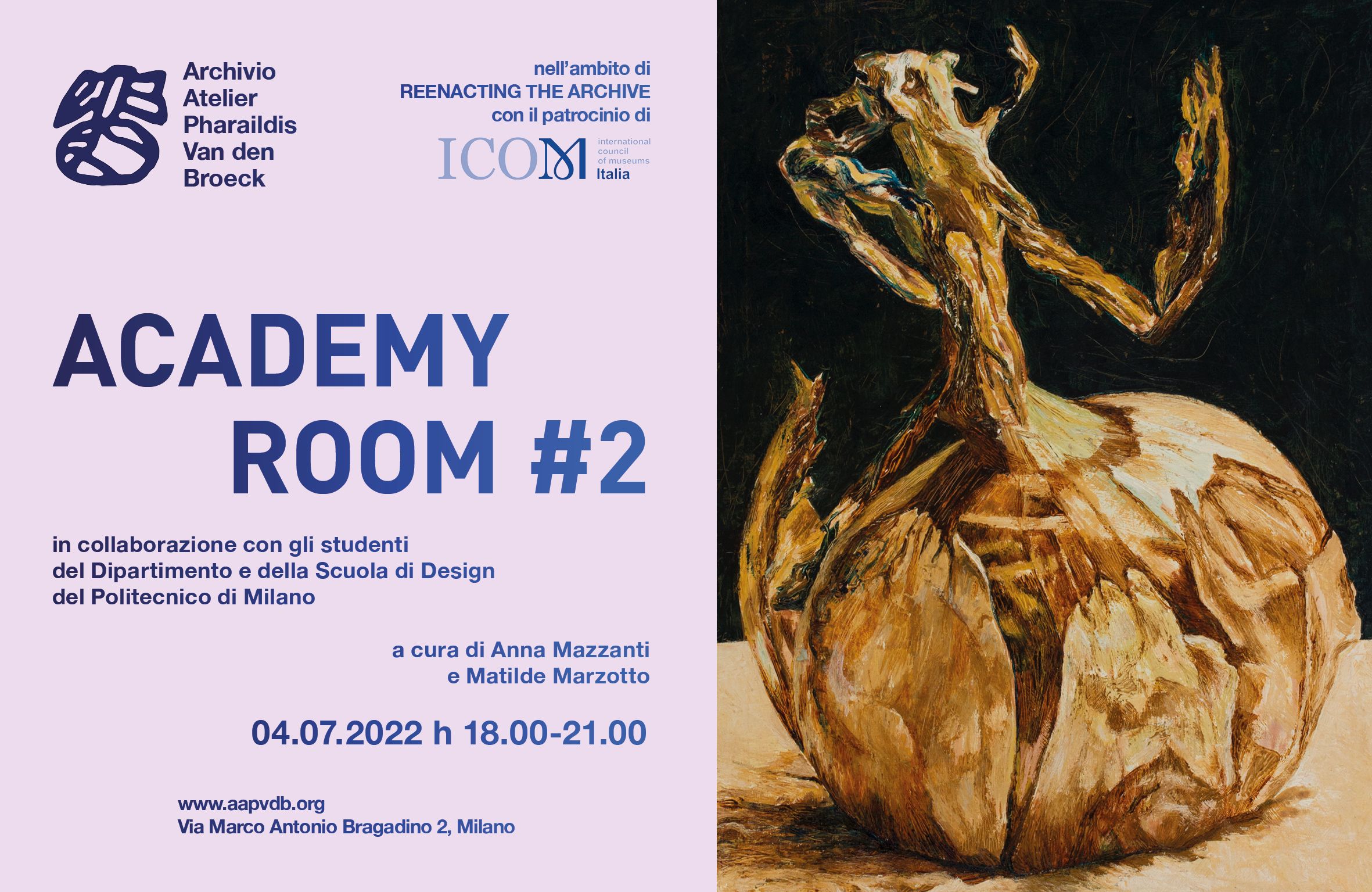 Archive Atelier Pharaildis Van den Broeck is pleased to present ACADEMY ROOM #2 in collaboration with the students of the Department and School of Design of the Politecnico di Milano and curated by Anna Mazzanti and Matilde Marzotto.

On Monday 4 July 2022 at 6 p.m. the students - Marco De Marchi, Elena Giusti, Lara Macrini, Chiara Riva - will present a preview at the archive of the prototypes and sketches they have made over the last few months in which, inspired by the artistic language of the Italo-Belgian artist Pharaildis Van den Broeck, they have come up with a project that reflects on the idea of gadgets for the institution.

Starting from the idea of morphing, the students extrapolated from the paintings of Pharaidlis Van den Broeck a hundred images of onions, which after a process of visual synthesis were used to simulate the natural growth cycle of this bulb. From this visual sequence, a prototype flip-book was born, which through the simple gesture of quickly scrolling through the pages, visually recreates the life of the onion, from the bulb to the evolution of the sprout to becoming the logo of the Atelier Pharaildis Van den Broeck Archive. The small book is accompanied by an audio track created specifically to evoke the sense of development and transformation that characterises Van den Broeck's plant and artistic production.

The activities were carried out within the framework of the post-Covid didactic experimentation course "Contemporary Art and Spaces" of the Politecnico di Milano | Department of Design, which promoted interdisciplinary cooperation experiences, aimed at generating relations and collaboration between students with skills in design and some institutions linked to the artistic culture of the
contemporary.

The cycle of ACADEMY ROOM is designed to present the practice and artistic language of Pharailids Van den Broeck as a source of inspiration for the younger generation and to foster multidisciplinary projects.

The initiative is part of the cycle REENACTING THE ARCHIVE, a six-month programme of initiatives aiming at enhancing the figure of the Italian-Flemish artist and fashion designer Pharaildis Van den Broeck and her work through the involvement of different audiences in the fruition and production of new cultural contents.

This initiative is realised under the patronage of ICOM Italy.